Sometimes It Takes a Village-Bloor West Village That Is!

By adminbloor February 4, 2014 Our Blog
No Comments 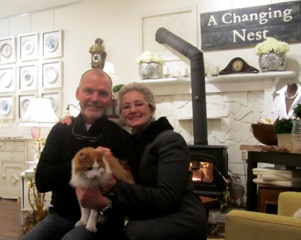 It was January 3rd when Simba, a handsome 13 year old cat first came through our doors.  He was in the care of Diana and Gord Ross.  Diana is the owner of A Changing Nest home furnishing and consignment shop in Bloor West Village .  About 6 months prior the Ross’ noticed Simba wandering the area around the store.  Day after day there he was, looking like he could use a meal and a place to stay.  One day, Simba wandered in.  Being natural animal lovers, the Ross’ welcomed him.  Already having a number of other pets of their own, they were unable to bring Simba home, but the store seemed like a perfect fit for him.  Simba took to his new home and immediately felt comfortable with his new family.  He also was hired as the store’s “meet and greet”, welcoming customers and enjoying the attention and affection in return.  Thanks to the love and care provided by the Ross’ he went from a street cat to a celebrity and became known by name by most customers and residents in the area.

The day Simba first visited us, he was in to have an infected wound in his paw examined, but at this visit, a much greater concern was noted.  Simba had glaucoma in his left eye.  Glaucoma is a condition where there is an increase in pressure within the eye.  It is painful and permanently damages the optic nerve, resulting in blindness.  Unlike glaucoma in humans, dogs and cats respond very poorly to medical management and often need their eye removed to resolve the pain.  We felt for the Ross’ now having to make some important and costly decisions for their new friend.

Instantly, we could see why everyone had grown so attached to Simba; his bright orange coat, his kind and gentle personality and the head butts of course! We knew we had to help.  The Ross’ had already done so much to care for Simba, on top of their other pets, yet Simba still had a painful condition that needed to be treated. We wanted to help this community cat!

On January 9th, Dr. Lyons and the team at the Bloor Animal Hospital volunteered their time and resources to help Simba by surgically removing his painful and permanently blind eye.  They also cleaned his teeth and removed a painful cavity.  Simba sailed through his surgery without complication and made an excellent recovery at the hospital.  He was a fabulous patient and bonded with the team immediately.  Diana and Gord came to visit Simba frequently giving him love and affection to help him feel comfortable while at the hospital.

Simba is now back at home at the store and doing better than ever!  Now pain free, Diana is seeing him play with toys that he has had for 5 months now, but has never taken interested in!  He is active and eating and back to working as the host of A changing nest.   Clients and community residents alike are flocking to the store to see Simba back in full swing!

Bloor animal hospital is proud to be part of such a fabulous community where we can work with other local business’ like A Changing Nest to help animals needing medical attention.  Sometimes it really does take a village…. 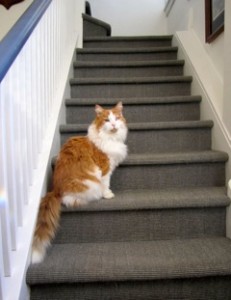