By adminbloor February 6, 2014 Our Blog
No Comments 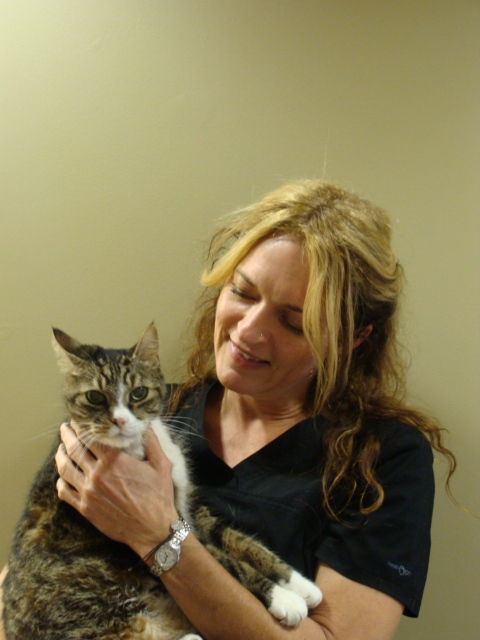 Most recently I had both my cats in at Bloor Animal Hospital for dental procedures. I have had numerous, healthy cats over the years, all but one of them needing their teeth cleaned at one point in their lives, so I am well aware of how common and important it is to have your pets’ teeth cleaned. However, both of my current cats have unique issues that were of concern for me and I’d like to share this experience with you. 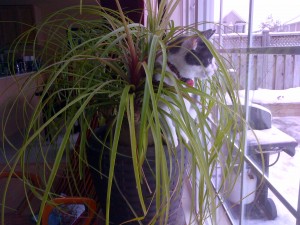 Heidi: Heidi is my five (5) year old FIV positive kitty. FIV stands for Feline Immunodeficiency Virus which can make it more difficult for Heidi to fight off infections. Heidi was affectionate with those she knew, but could be a bit shy with those she did not. She liked to play for short periods of time and would then go hide for awhile. She rarely picked up toys in her mouth and did not play with toys for any extended period of time. I just considered Heidi a sweet but shy kitty. Heidi would always have runny eyes, a probable consequence of a herpes virus and/or related to having FIV. She rarely kept her face clean and disliked it when I would take a tissue to wipe the dark tears away from her face. For such a young cat, Heidi’s gums have been very red and sore looking, possibly due to her FIV positive status. I knew her teeth needed to be cleaned. Upon examination, it was determined that Heidi would need quite a few teeth out. I brought her into work with me so that Dr. Morris could perform her dentistry. Dental x-rays revealed that the roots of her teeth were mostly resorbed and that it was basically only her sore, red gums that were holding her teeth in. All her teeth had to be extracted except for three (3) canines in the front! I felt so bad for Heidi! What would she think when she woke up? Would she be depressed that she did not have any of her teeth anymore? She would only be able to eat canned food now. I wondered if she would miss crunching down on her kibble. Maybe she would feel like less of a cat without her shearing, carnassial teeth that made her the true feline carnivore that she was? What would an empty mouth full of gums feel like? And I wouldn’t be able to explain to her why she no longer had teeth or give her any forewarning that this was how she would wake up. I felt so bad for her!

When Heidi came home, she was happy and rolling around, sometimes pawing at her mouth, but otherwise content. I attributed this behaviour to the long-acting pain killer that was given to her…good times! However, days turned into weeks and it was revealed that Heidi was a new cat..and not just the fact that she was a cat with only 3 canine teeth! She now spends her most of her time out and about socializing, playing with toys and with her people family. She keeps her face clean! She wipes away the tears on her face and I never have to do it for her! A revelation came to me, someone who thought she knew cats so well, especially her own: although I always thought Heidi was a happy cat, there was no doubt that her sore gums and teeth were hurting her and I had no idea just how much! All that time, she was not at her full happy capacity. Now that Heidi’s face wasn’t sore, she was happy to keep her face clean of tears. Now that Heidi wasn’t in pain, she was happy to be pet and played with, picking up toys in her mouth and tossing them around! And she is a-ok with canned food instead of dry….trust me! It makes me so happy to see Heidi such a changed cat! I only wish I had only done it sooner! 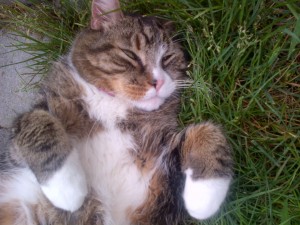 Keats: Keats is my fifteen (15) year old diabetic cat. Keats was diagnosed with diabetes in 2007 and has been receiving insulin injections twice a day since then. He had dental cleaning in 2011 with a few extractions. Diabetic cats tend to be more prone to infections which includes dental disease. Keats’ breath was getting increasingly bad and his teeth did not look good. A thorough examination confirmed that he would need his teeth cleaned with possible extractions. Preoperative bloodwork and urine testing revealed that, at Keats’ older age, he was beginning to show signs of kidney issues. Despite knowing firsthand the competency of the doctors and staff here at Bloor Animal Hospital and how often dental cleanings are performed on the young and old here, I was personally a bit nervous about putting my own 15 year old diabetic cat with kidney issues under anaesthetic. But I also knew that I have had cats that have lived to be 20 years old and if Keats was going to be one of those cats, he couldn’t do it with an infected, sore mouth. Not only was his mouth sore, but the bacteria and infection in his mouth was also aggravating his diabetic and kidney issues.

Keats was started on IV fluids the night prior to his dentistry to prepare him and his ageing kidneys for the anaesthetic that was going to be used the next day during his dental procedure.

Nine (9) extractions later (leaving only one lonely canine tooth in front!), Keats was done! And, just like my experience with Heidi, Keats was a much happier cat! He is far more active and his eyes have that younger cat sparkle back in them! And now Keats will be much more likely to reach that ripe old age of 20…or maybe more…with a mouth which is free of pain and discomfort.